NutriFlair Ceylon Cinnamon (Made with Or... 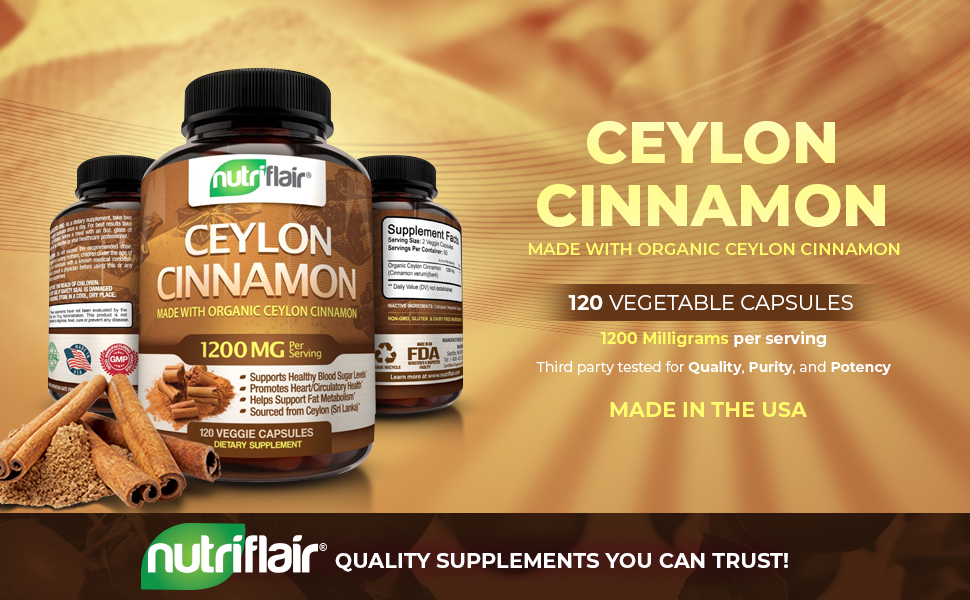 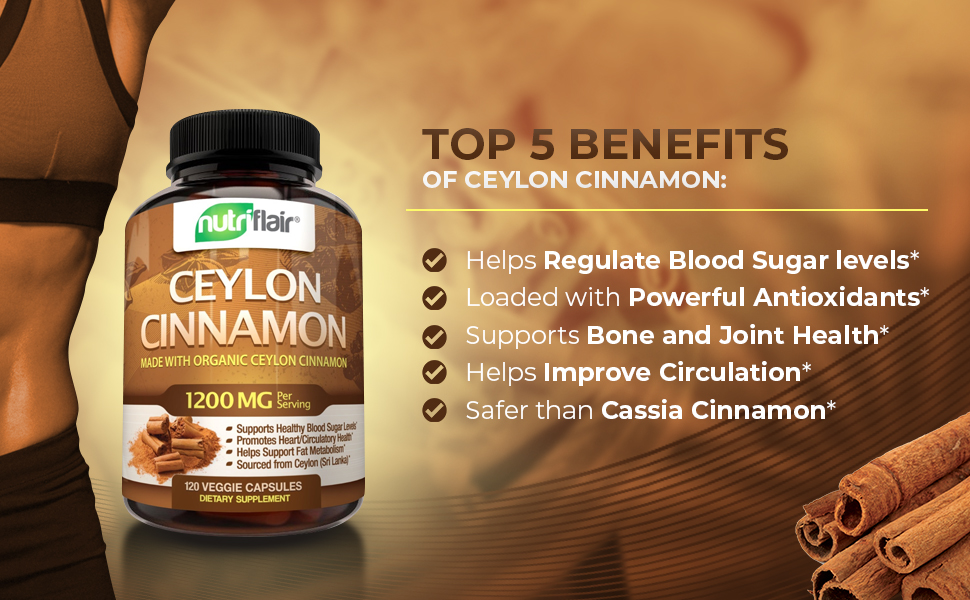 Originating from Ceylon (Sri Lanka), Ceylon Cinnamon has been known as the “True Cinnamon” or the “Real Cinnamon.” It possesses outstanding health benefits, especially for those looking to regulate their blood sugar levels, and those challenged by obesity and high cholesterol issues.

The NutriFlair Ceylon Cinnamon Supplement is Made with All Natural Ceylon Cinnamon Powder (Cinnamon Verum / Bark), here in the USA, and has been Certified Organic by the Utah Department of Agriculture (UDAF). It contains 120 Capsules (600 Milligram per Capsule), of unadulterated, Ceylon Cinnamon. 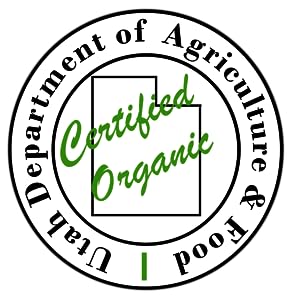 ✔️ Certified Organic by the Utah Department of Agriculture (UDAF)

✔️ Made with Non-GMO Ingredients

Made with Pure Organic Ceylon Cinnamon – NutriFlair Ceylon Cinnamon Supplement, Made with Pure and Natural Ingredients, is a powerful antioxidant, free of gmo Ingredients. Supports healthy blood sugar levels, promotes heart health, helps with weight management, helps with joint pain, and serves as a power anti-inflammatory supplement
Sourced Directly from Ceylon (Sri Lanka) – Our Pure Cinnamon Ingredients are sourced directly from Ceylon (Sri Lanka) hence the name Ceylon Cinnamon; also known as true cinnamon or Cinnamon Verum Bark; The Ceylon Cinnamon powder used is the highest quality available and is in very high demand, thus more expensive than the common Cassia Cinnamon; Contains no Stearates or Artificial ingredients
Safer than Cassia Cinnamon – Always look for CEYLON Cinnamon when shopping for Cinnamon Supplements; this is the most effective and safest type of Cinnamon Supplement. The alternative Cassia Cinnamon, which is also commonly known as Common Cinnamon, may be toxic when taken as a supplement or used in large doses over prolonged periods of time
Trusted Brand – Satisfaction Assured – If our Ceylon Cinnamon pills do not bring noticeable value to you and you don’t absolutely love them, your purchase is on us; No questions asked; Our world-class customer service wants you to be Satisfied with your purchase; Absolutely no risk; The bottle comes with the NutriFlair Satisfaction Pledge for 30 days; Have this all-mighty antioxidant supplement and health protector by your side and keep your blood glucose levels balanced, everyday

Your email is private with us and will never be shared.